Needles make most pet parents cringe, but those used for acupuncture don’t hurt animals, they help. They are what traditional Chinese veterinary medicine has used for thousands of years to enhance blood circulation, balance the nervous system and promote release of pain-relieving hormones in animals ranging from rabbits to horses.
“It’s a holistic approach that pinpoints the issues, unlike medicines that must go through the entire body,” says C.J. Schnier, coach for the University of Wisconsin women’s polo team. The five thoroughbreds and a quarter horse on her Verona, Wisconsin, farm have a standing appointment every three weeks with a veterinarian that performs acupuncture for their injuries, arthritis, colic and immune systems.
Since the founding of the Boulder, Colorado-based International Veterinary Acupuncture Society in 1974, the number of certified animal acupuncturists has grown from 80 to about 1,800, making the specialty more accessible worldwide.

Beyond the usual four-legged friends, acupuncture helps animals such as reptiles, rabbits and livestock as a complement to Western medicine or other body work to alleviate pain and speed recovery. “All animals can have acupuncture,” says veterinarian Carol Jean Tillman, of the Animal Kingdom Veterinary Hospital, in Las Vegas. She uses acupuncture for dogs and cats with musculoskeletal conditions such as lameness due to injuries, arthritis and paralysis, and also finds it helpful for allergies, immune system problems and digestive issues.
A 2016 review of veterinary acupuncture clinical trials published in the American Journal of Traditional Chinese Veterinary Medicine concluded that it was safe and effective in treating a wide range of medical conditions like canine hip dysplasia, pain from osteoarthritis and surgery, intervertebral disc disease, seizure disorders, vomiting, inflammatory bowel disease, cardiac and respiratory problems, and depression and anxiety.

Dry needle acupuncture is what most people recognize—the use of thin, solid, metallic needles inserted into specific meridian acupoints on a body. There is also aquapuncture, that involves injection of a liquid, such as diluted vitamin B12, into an acupoint to relieve muscle pain and discomfort. Moxibustion is a technique used for joint stiffness or allergies in which a heated Chinese herbal compound is applied to or held over acupoints. Electrostimulation, sending an electrical current through pairs of inserted needles, takes less time and creates longer-lasting effects. 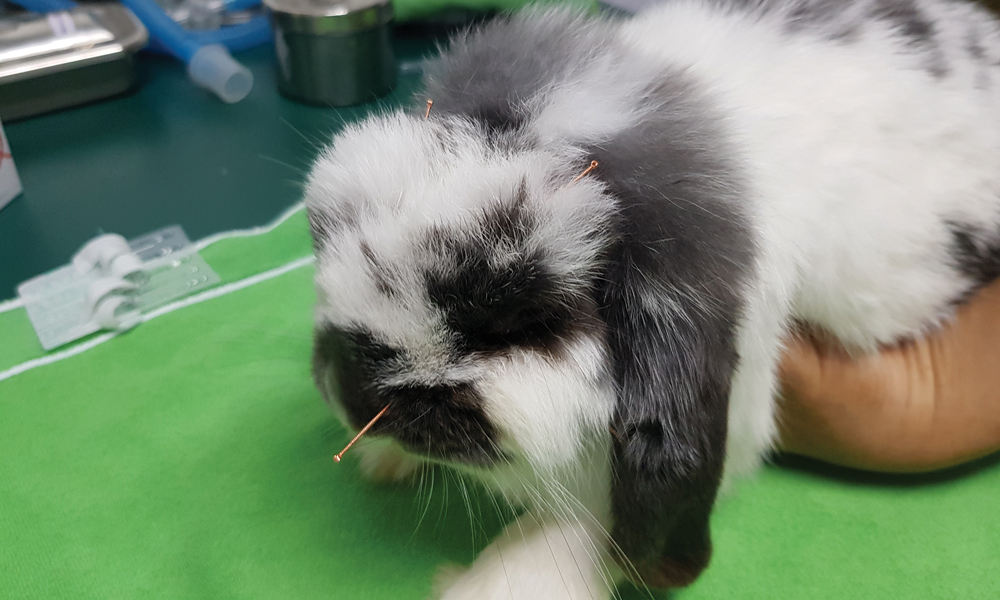 Monika Wisniewska/Shutterstock.com
“Electrostimulation is very effective for treating neurological conditions such as radial nerve paralysis, facial nerve paralysis, disc disease and any condition that requires strong stimulation,” says veterinarian Bernadette Aleksey, at the Adorable Pets Veterinary Center, in Haddam, Connecticut. She regularly treats dogs, cats and horses for arthritis, neck and back pain, as well as neurological and gastrointestinal problems.
Results similar to acupuncture can be obtained without using needles. Acupressure using hands, cupping therapy using special cups or cool laser stimulation using low levels of light can stimulate hard-to-reach acupoints or work for animals that are too restless for needles. “Depending on the severity of the condition, acupuncture treatment could be recommended daily for several days, then spaced out to every week, then as-needed or once a month,” says Tillman.
Precise placement of tiny needles into an ailing dog or a massive horse seems fraught with risk, but the animals only need to be gently restrained and plied with treats during the first treatment. They generally relax quietly for subsequent treatments.
Even Sienna, Schnier’s typically reactive thoroughbred mare, stands still for acupuncture around a swollen eye. “She knows it’s being done to help her,” Schnier says. And her 17-year-old cat held still for tiny needles placed in the sinus areas that helped it breathe better.
In a clinical setting, pets may be more apprehensive, but there are workarounds such as lasers or aquapuncture. “We provide a relaxing environment. The lighting is dimmed, we play relaxing music and treats are encouraged,” says Aleksey.
Pet parents can search for a certified veterinary acupuncturist through the International Veterinary Acupuncture Society.
Julie Peterson writes about pets, health and environmental issues. Connect at [email protected]
In-Print, Natural Pet Feature National Content Acupuncture April 2020